Dehalogenation (removal) of PCBs in oil 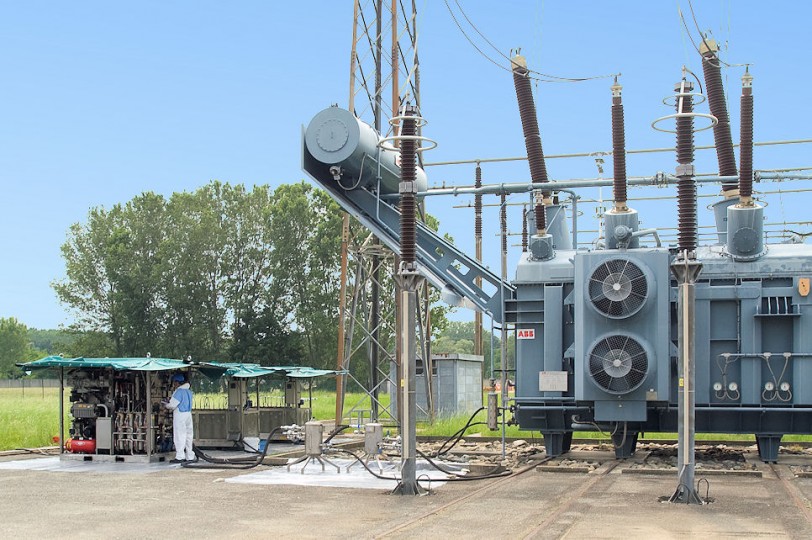 
Friday March 17th, 2017 By adamalfredo Comments are Off

For transformers (and other equipment) with insulating oils contaminated by PCBs, Sea Marconi has developed the CDP Process® (patent EEC No.0675 748 – USA No.5,663,479), an integrated solution that uses:

Sea Marconi is an industry pioneer since the first version of the CDP Process® , was developed in 1982, aimed at decontaminating transformers and dehalogenating/detoxification of PCB/POPs in the transformers’ insulating oils.

The CDP Process® is more effective and cheaper than changing the oil.. The latter in fact involves numerous problems: handling oil, PCB waste disposal and putting the transformer out of service whilst changing the oil, contamination of the new oil (despite the oil change, 10/15% of the old contaminated oil remains impregnated in papers and quickly mixes with the new oil gradually contaminating it).

The CDP Process® has a number of unique features, and ensures that PCB concentrations comply with the limits set by local laws or internal specifications: PCB < 50; < 25; < 10; <2; (<0,5 Japan) mg/Kg(on site, continuously and in a closed circuit, without emptying the transformer even partially with the possibility of treatment when filled (On-Load).
The CDP Process® operates in safety, at low temperatures (80-100 °C) and does not present risks of explosion and/or fire.

Thanks to references from customers around the world, Sea Marconi has won several contracts from international organisations in developing countries.

Sea Marconi’s extraordinary results are based upon its experience in the industry since 1968, the use of Decontamination Modular Units (DMU), designed and manufactured internally, and the formulation of specific reactants (S/CDP®) used depending on the operating scenario.

The continuous circulation of the liquid creates a constant flow of fluid in the transformer that favors the elimination of deposits (sludge) on papers and in the case.
The task is done safety thanks to a control system software able to check moment by moment that the process is taking place in safety and with quality assurance; 24 hours a day even without the presence of an operator.

The treatment is performed with the On-Load option, keeping the transformer in service, under tension and filled, i.e. without any loss of production (with international experience also in nuclear power stations and transformers up to 760 MVA and 500 KV).

Click here to see the detail of the activities:

The CDP Process® is the unique and safe technology used for decontamination of transformers, dehalogenation and detoxification of PCBs in insulating oils with full functional recovery and “NO PCBs” reclassification of the machine and the oil.
With the following features:

for PCB treatment whilst in service and at the end of the life cycle as per Ministerial Decree 29 January 2007 published in the O.G No. 133

A unique and effective method

On site, in a closed circuit, without emptying the transformer, circulating hot oil (also on-load) able to meet the legal limits imposed by the various, and most strict, international authorities (eg.:Japan has a PCB limit of 0.5 mg/Kg)

as the CDP Process® avoids the replacement and the incineration of huge amounts of oil, that can still be used, as well as avoiding the risks associated with handling contaminated oil.Moreover it does not produce waste

Highly efficient with other

The treatment units’ small dimensions mean they are operational even under extreme logistical constraints (e.g . in bunkers, and mines). The same process can be done with stationary plants in order to decontaminate in a place where large quantities of oil can be collected coming from small transformers

Following the decision matrix (E.3) according to the Guidelines of the Ministry of Environment for the definition of BAT (“Best Available Tecnique”) between the different PCB decontamination technology – D.M.29/01/2007